We recently asked one of the Forestry Managers who works on some of the projects we are assisting in, to write a piece detailing the work that goes into new woodland creation. In this example we see the conversion of low-quality arable land to productive forestry, which is expected to provide the landowner with long term income and sequester a significant amount of carbon. The Story of Auchintender Woodlands, one of Scotland’s Finest – by Simon Jacyna

In 2003 Bert Duffton planted 91 ha of productive conifer woodland under the Grampian Forest Challenge Fund at Auchintender farm, near Huntly in Aberdeenshire. This was on the poorer land on the farm, mainly grade 4.1. This woodland established well with high growth rates and the family were delighted with the results. The better land was left in agriculture; mainly cereals.

In 2016 Bert’s daughter Aylsa Leslie and her family investigated planting up most of the remainder of the land which was being farmed under a limited partnership. The benefits sought were to generate a significant capital sum and regular income for six years, reduce the scale of the farming operation and in the longer term generate regular tax free income from the sale of thinnings.

This site comprised mainly large arable fields which would allow most of the initial planting and subsequent maintenance to be done by machine. The local forestry strategy map showed the farm as being in a preferred area for productive woodlands so the scheme would benefit from a higher rate of grant. 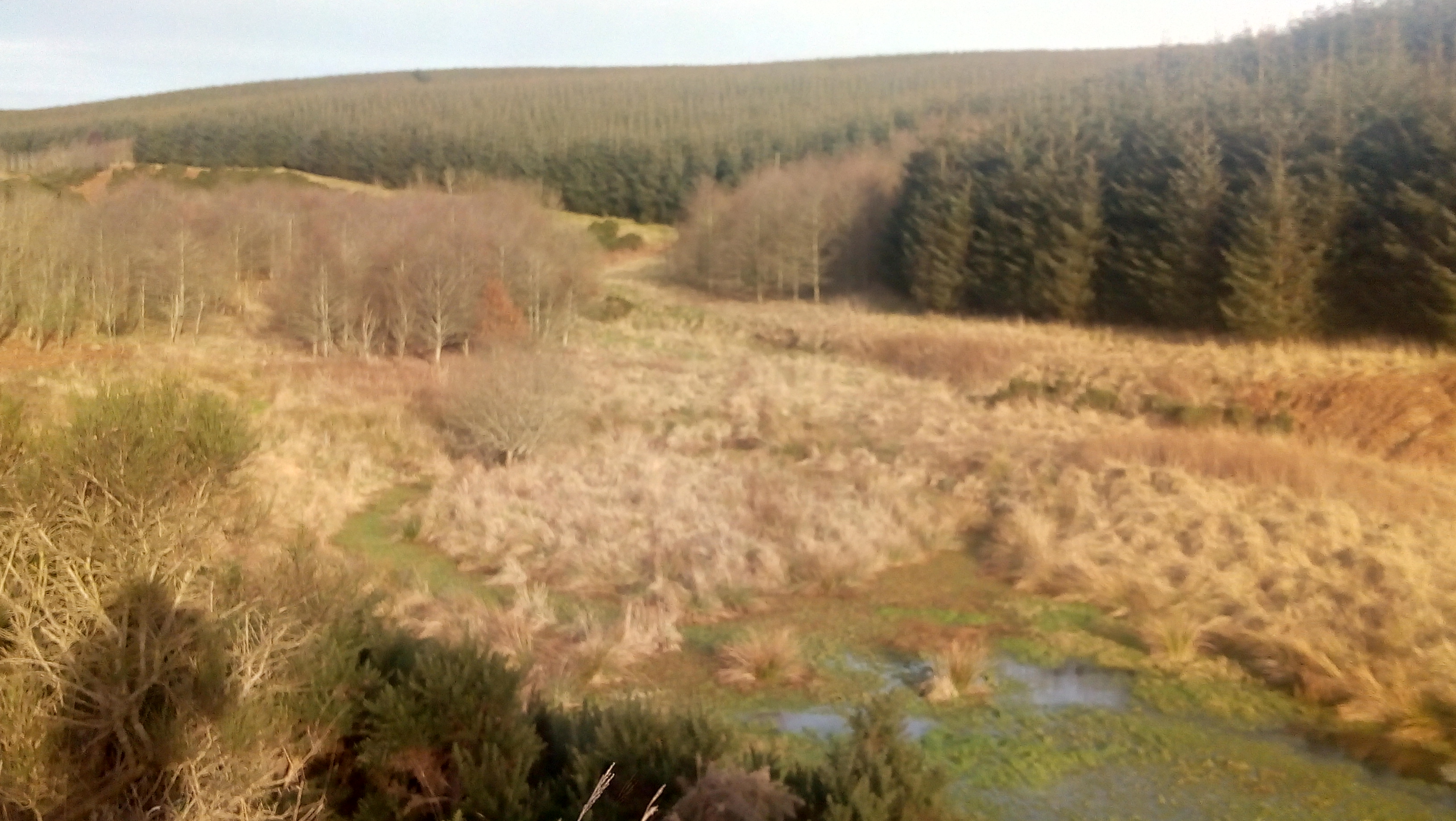 The 2016 scheme divided into three separate blocks of land totalling about 48ha.

1 The largest field was suitable for productive conifers and open ground would be left for the powerline wayleave, around the well and water supply and the site of a future loading area.

2 A smaller arable field was also suitable for productive conifers and again open ground would be left for the wind turbine and to create open ground closer to the house. This was fringed with smaller broadleaved species for visual amenity. This had the best soils and higher yielding Douglas fir

and vegetatively propagated ‘super Sitka’ were chosen for here. The field had mature forestry on three sides so we decided this would need a deer and rabbit fence for protection.

3 The area in front of the house consisted of arable land and steep banks with permanent grassland on two sides and wet ground on the flood plain. We decided that it was most appropriate to keep all of this remaining arable land in agricultural use to meet the qualification requirements for being an active farmer, and to fence off the wet ground and the permanent grass for planting.

This area was ideally suited for native broadleaved woodland as it would fringe the water-courses creating a substantial block of riparian woodland with considerable conservation and amenity benefits. These now extend for over 2,300m. It is protected by a new stock fence with all the trees in 1.2m shelters. The remaining farmland was reseeded and the grazing is now let out. This layout retains the open views from the house.

The final composition of the 139 ha woodland is shown below.

Although the direct cash flow was positive afforestation substantially devalued the land, displaced agricultural income and resulted in the loss of some of the farming subsidies. Income from the sale of timber was many years in the future. All of these were a barrier to planting which meant that the scheme passed the Additionality test. This meant the owner was able to sell carbon credits through Forest Carbon. We estimated the scheme will sequester just over 10,000 tonnes of CO2 over forty years. 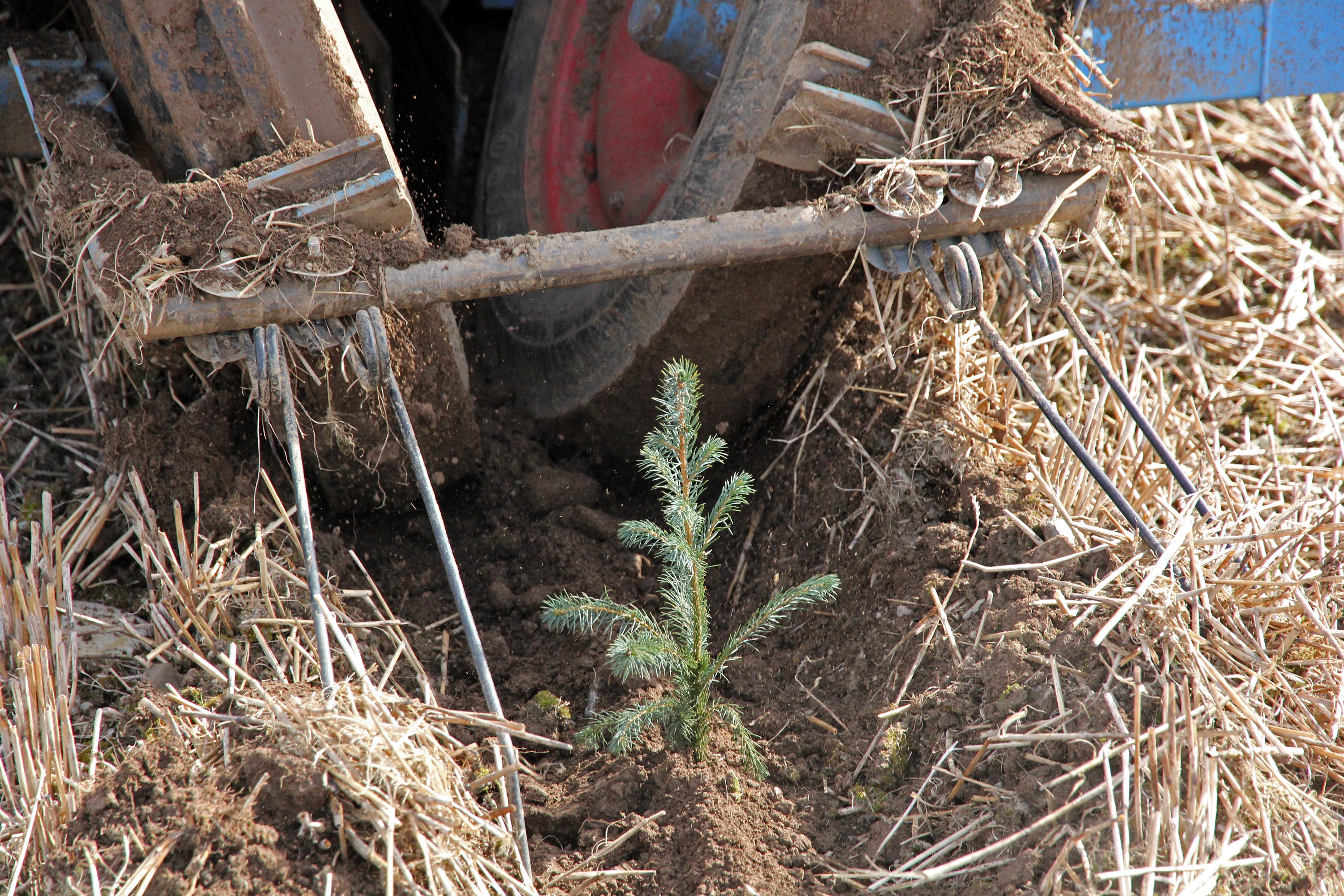 We obtained quotes for the trees and engaged local contractors. Shaun Conroy, of SRC Contracting had built a tree planting machine and we engaged him for the planting and initial spraying. He and Kirsty planted 100,000 conifers over a six day period in March 2017, band spraying with a mixture of systemic and residual herbicide at the same time. Planting was at 2,700 per ha which is above the grant contract minimum of 2,500 per ha. Machine planting (suitable on good soils) is cheaper than hand planting and initial planting at a higher density can eliminate the need for replacement of losses if these are low and scattered.

Alex Henderson hand-planted and maintained all the broadleaves. 5,400 trees were planted in tubes in autumn 2016, protecting the trees from deer browsing, and were all spot weeded with systemic herbicide during the following spring.

We engaged a local stalker for the wildlife control – no rent was charged as the agreement was for crop protection. Over 30 roe deer were shot in the first year alone. Their numbers have exploded in Aberdeenshire in recent years.

Broadleaved losses over two years were 8% and these were all replaced. Conifer losses were negligible and there was no replacement planting.

After thirty months the woodland were sufficiently established that little further maintenance was required. Now in their fifth growing season we can stand well back and watch them grow.

There has been an intensive breeding programme for Sitka spruce over the last twenty years and all the spruce on the scheme was ‘improved’. I estimate the growth rate should average at least Yield Class 30, i.e. a maximum average annual growth rate of 30m3 per hectare per annum. The best stands are growing at YC 34 or possibly more.

In 2020 we upgraded the existing farm track and built a kilometre of new forest road with turning areas. There is good stone on site so this was not too expensive. This provided the access needed to thin about 29ha of the original plantings in autumn 2020. 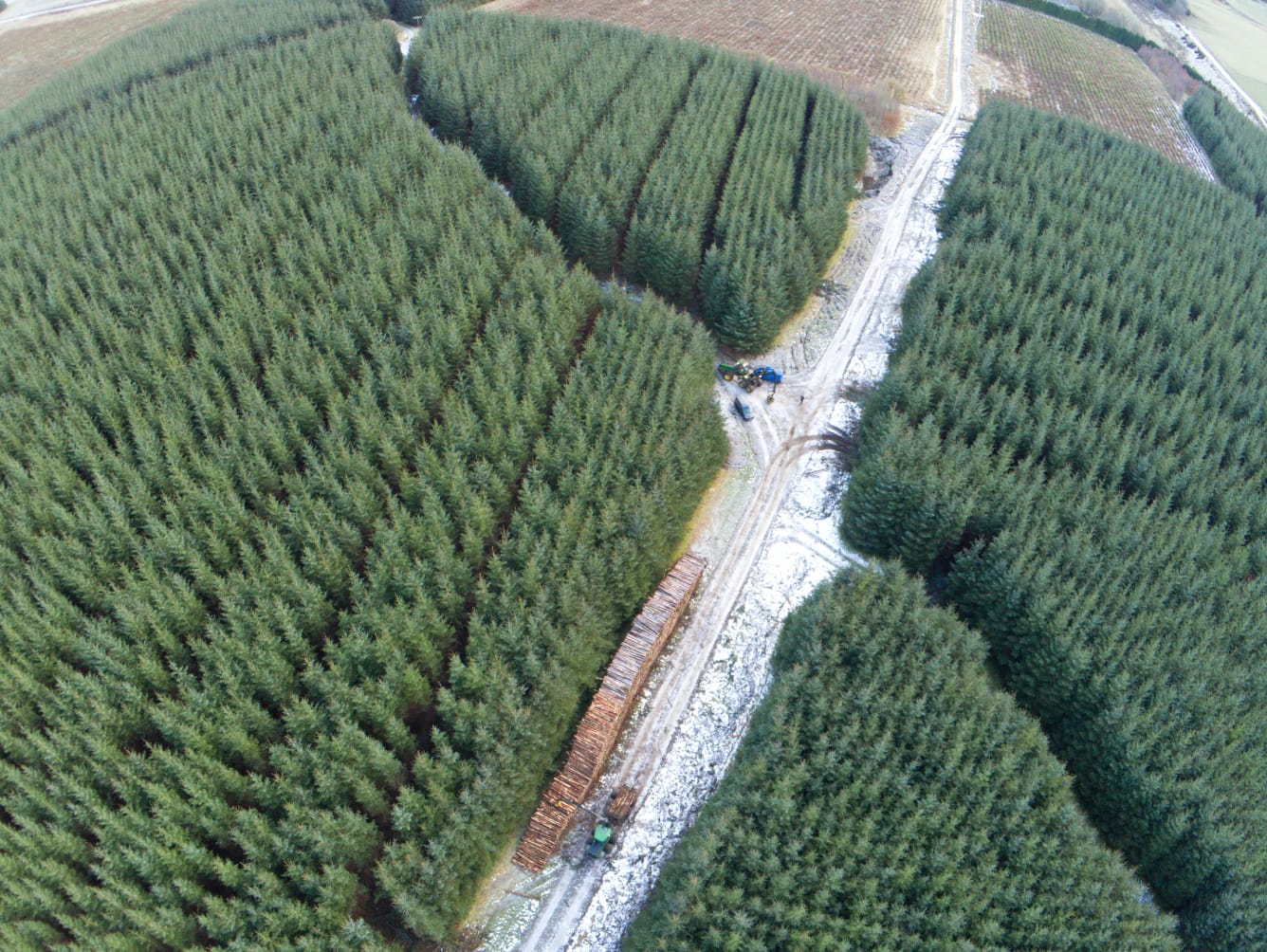 I put the timber sale out to competitive tender. In the event we did not accept the highest offer but accepted a slightly lower one from Stuart Munro of Munro Harvesting because we knew that he works to a very high standard and takes a great interest in the work.

For the thinning we removed every seventh row and about 30% of the remaining trees, concentrating on the smallest and those of poorest form. This yielded about 100 tonnes per hectare and although the trees were only 18 years old, 6% of the out-turn was sawlogs.

The income from the thinning funded the construction of the rest of the road during summer 2021 which will allow us to thin the balance of the older woods in 2022. The growth rates are a little lower on the higher ground so this fits with the extra time needed for the trees to mature.

The crop is quite deep rooting and this good stability should allow us to thin the woods at least twice more before clear-felling when they are about 40 years old. The varying growth rates also allow us to thin half the crop every three years providing a regular income.

In 2021 we were delighted when the older woods won the Hunter Blair award for Silvicultural Excellence in the Scotland’s Finest Woods Awards.

In terms of carbon sequestration this is an efficient woodland. Prior to planting the land had been under continuous arable crops for many years so the soil would have had a very low organic content. There is negligible soil disturbance with machine planting and after a couple of years for the ground vegetation to recover the soil carbon levels are probably now rising rapidly. The trees are now fixing a lot of carbon each year. When harvested much of the timber will go into construction where the its low embedded carbon will remain for many more years and displace much higher carbon content materials such as brick and concrete.

The woodlands were the subject of a Farm Advisory Service Case Study and were also the venue for a FAS farm woodlands promotional day. This helped the woods also win a ‘Highly Commended’ in the Climate Champions category of the Finest Woods Awards.