This is article 2/5 for the series 'Woodland Carbon Explained' written by Matthew Hay for Forestry and Timber News.

The Woodland Carbon Code exists to make financially unattractive woodland creation projects attractive. In doing this, it enables trees to be planted that otherwise wouldn’t be, and additional carbon sinks to be created in the UK. But how does woodland carbon improve a project’s economic prospects in practise? And how can the carbon income actually be released?

The answer is via two routes: the upfront sale of future carbon, or the future sale of sequestered carbon. Both options have advantages and drawbacks, which lend themselves to different types of woodland creation projects.

For example, the upfront sale of future carbon revolves around a carbon product known as a ‘Pending Issuance Unit’ (PIU). These can be thought of as a guarantee of future carbon sequestration. The number of PIUs a woodland creation project has at its start is identical to the number of tonnes of carbon dioxide equivalent (CO2e) that project will sequester over an agreed contract duration. In other words, 1 PIU = 1 future tonne of carbon.

Over time, Woodland Carbon Code projects undergo successive verifications. This first of these happens five years after the trees were planted, with further verifications every ten years subsequently. The purpose of verifications is to confirm that a woodland creation project is ‘on track’, i.e. that it is delivering the amount of carbon that was agreed at the outset. This involves counting the growing trees, making sure the right number and right species are there, and that they aren’t being hindered or damaged by herbivores, pests, disease or extreme weather. 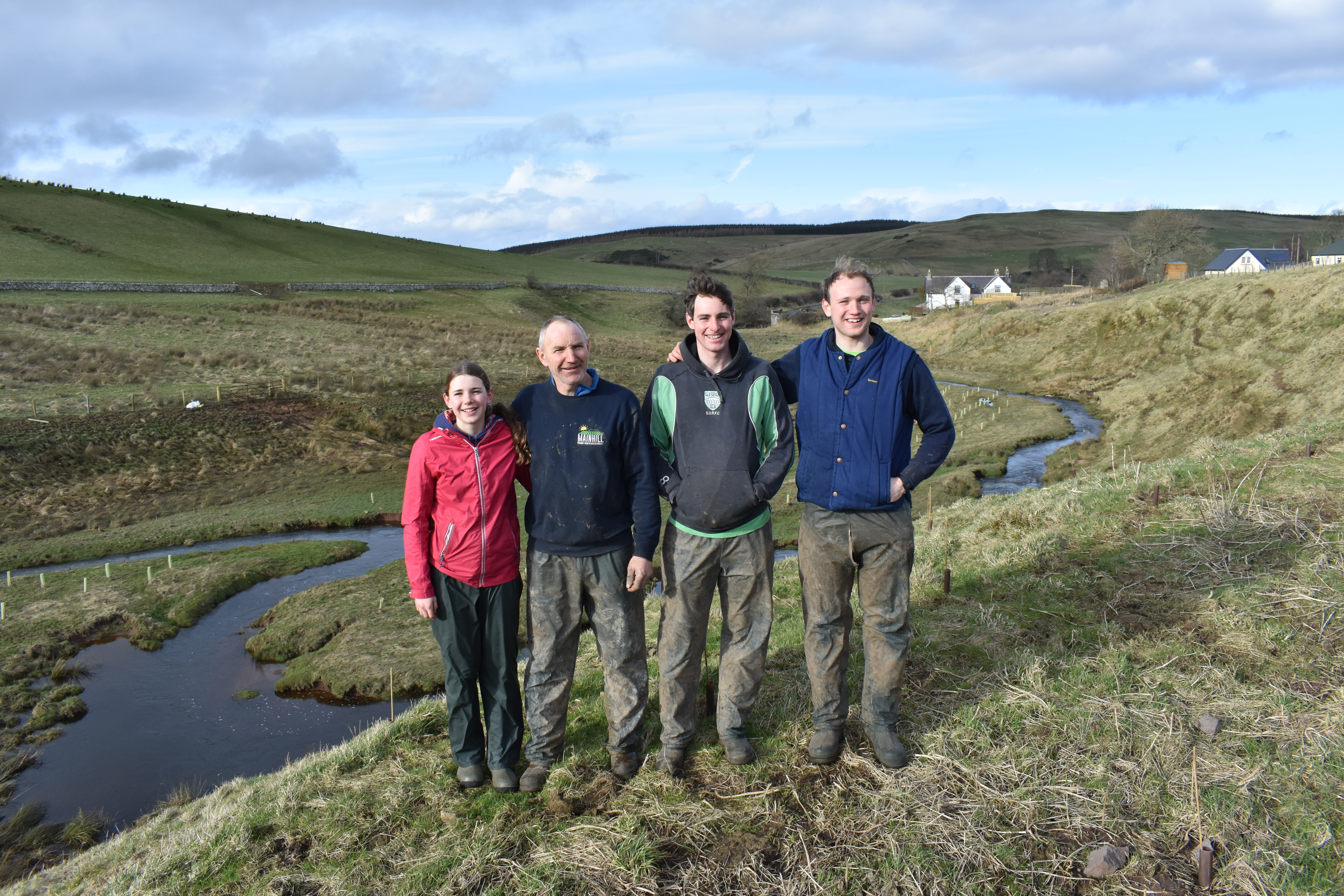 Phillip Anderson and family successfully planted native woodland on their organic hill-farm in the Scottish Borders. The trees were planted to deliver riparian benefits to the watercourses on their farm, which flow into the Oxnam water, and were part-funded through the sale of carbon as PIUs.

After each verification a certain amount of CO2 can be confirmed as having been sequestered by the growing trees. It is there, visible as solid carbon in the wood of their trunks, no longer an abstract concept, or component of the atmosphere. At this point, the tonnage that has been sequestered is represented through the conversion of an equivalent quantity of PIUs into ‘Woodland Carbon Units’ (WCUs).

For example, if a woodland creation project is going to sequester 10,000 tonnes CO2 over its contract duration, that gives the project 10,000 PIUs to sell at the outset. After five years, and assuming a successful verification, the saplings may have grown enough to have sequestered 50 of the 10,000 tonnes. As a consequence, 50 PIUs will be converted to WCUs at this point, recognising the 50 tonnes of CO2e that are now physically locked away in the trees.

Ten years later this woodland will be due its second verification. At this point, the trees could have sequestered another 1,500 tonnes of CO2. Another 1,500 PIUs will be converted to WCUs, giving the project a total of 1,550 WCUs after 15 years.

This example illustrates two important points. The first is that a growing woodland doesn’t sequester carbon at the same rate throughout its lifetime. Due to soil disturbance (and the associated CO2 emissions) during ground preparation, many woodland creation projects are barely breaking even carbon-wise after five years. After 15 years, by contrast, the trees have laid down extensive root networks and are growing quickly, with the sequestration rate increasing correspondingly.

The second point worth emphasising is the length of time required to release income from the sale of WCUs. Whereas PIUs can be sold upfront, most projects won’t have many WCUs to sell until 15 or even 25 years down the line. For many landowners, that is simply too long to wait.

These are the two options for releasing income from carbon: sell a project’s carbon upfront as PIUs, or wait until successive verifications convert those PIUs, incrementally, into WCUs.

For landowners who can afford to wait, selling WCUs can be lucrative. The most recent ‘Woodland Carbon Guarantee’* auction saw WCUs achieving an average price of £19.71, which compares favourably to the sale price of £5 - £7 currently achieved by PIUs.

However, we must account for the fact that we’re comparing a future price of WCUs with the current price of PIUs. Applying an appropriate discount rate brings the future price of WCUs back to their present value, allowing for a fair comparison with the present value of PIUs. More importantly for many woodland creation projects, the cash generated upfront through the sale of PIUs is critical: it is what enables the project to happen in the first place.

But what drives the price in this woodland carbon market? In the UK, the market is largely voluntary; businesses are not required to offset their carbon emissions (with the exception of the energy sector and some industrial businesses). This means that while supply is of course important, demand ultimately dictates the market price. Businesses will only pay what they want to for carbon credits, because they aren’t mandated to buy any, and cheaper offsets can always be procured overseas.

As a result, what we at Forest Carbon term the ‘charisma’ of a woodland creation project is often critical to the price its carbon can achieve. Most businesses want to buy carbon from woodlands with a strong story and clear benefits to society, be they social, hydrological or ecological. Rightly or wrongly, this means that carbon from woodlands comprised (primarily) of native species, which enhance biodiversity and/or have amenity value for local communities, commands the highest price.

*It should be noted that the Woodland Carbon Guarantee operates only in England.

Read the next article in this series: 'The Woodland Carbon Guarantee in England'.