Although most of the woodland creation projects Forest Carbon supports involve tree planting, we are always delighted to partner with landowners who want to achieve afforestation via natural regeneration.

Natural regeneration occurs when existing trees release fertile seeds that germinate successfully to produce new saplings. By renewing the supply of young trees in this way, forests can persist in the same location for centuries, or even millennia. This is also how trees colonise bare ground after volcanic eruptions, glacial recession or historic deforestation.

Despite being a natural process, for regeneration to be a successful woodland creation strategy in the UK normally requires human intervention, at least initially, to remove any barriers that are preventing sapling survival. This usually entails excluding livestock from the project area, or controlling wild herbivore populations, or both. Otherwise, hungry mouths will eat any and all young trees that spring up from the ground, preventing woodland from ever forming. Other interventions include disturbing the ground slightly, to remove excessive or rank vegetation.

There are massive advantages to facilitating woodland creation via natural regeneration instead of planting. The first, and most obvious, is that you end up with a more natural woodland habitat at the end. The necessity of having seed sources nearby will ensure the young trees are all of local provenance, and as well adapted to their environment as possible. Their distribution will also be determined by where the saplings naturally get away, i.e. in those soil and moisture regimes that suit them best.

The mix of species that grows will also be chosen via natural processes, rather than a professional forester. This isn’t necessarily good news, though, as some tree species are now missing from parts of the country where they used to grow. Aspen are a good example of this. They used to be widely distributed and fairly common right across northern Britain. But this species has suffered heavily as a result of its palatability, which has made it a favourite target of livestock and deer over the centuries.

The other huge advantage of facilitating natural regeneration is that it limits soil disturbance. When forests are planted, a variety of ground preparation techniques is usually employed to ensure the trees survive and grow well. But nearly all of these techniques release carbon from the soil in the process. As a result, most planted woodlands are initially growing at a carbon deficit, one that can take more than a decade to overcome in some instances. In contrast, natural regeneration projects can be net carbon sinks from the get go, and they also preclude the use of plastic tree guards, helping to reduce to flow of microplastics from our watercourses into the sea.

That said, there are some difficulties involved when nature regeneration guides the afforestation process. For one, regeneration projects require seed sources nearby, to supply the project area with potential saplings. In Britain’s denuded uplands, these seed sources often don’t exist anymore.

There is also inherent uncertainty at the project’s outset as to what exactly will grow, and in what quantities. This can make it difficult to calculate the carbon sequestration potential of a project, leading to the use of highly conservative estimates, which may reduce the amount of carbon funding available to landowners.

Overall, though, where it is possible and practicable to facilitate natural regeneration, Forest Carbon wholeheartedly embraces this approach. Fantastic as the professional foresters we work with are, they will never be able to fully replicate the diversity and complexity of natural forests. So, for the benefit of wildlife, soil carbon, plastic pollution and our trees’ provenance, we will continue to defer to mother nature whenever we can. 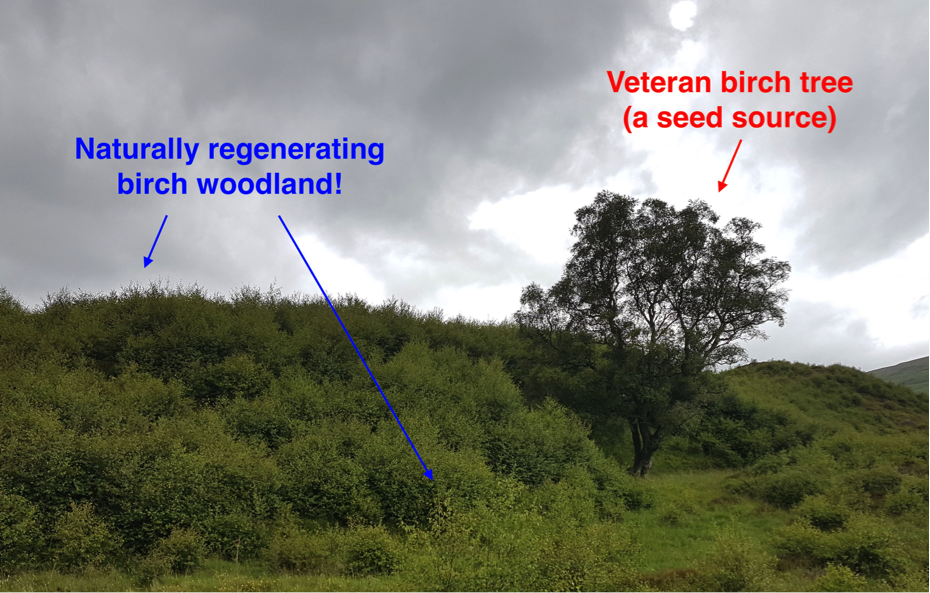