Thanks to funding by the Welsh Peatlands Sustainable Management Scheme, a project led by the Snowdonia National Park Authority, and in conjunction with the Roberts family who have farmed at Pennant Farm, Llanymawddwy for several generations, the 66 hectare peatland restoration project has been successfully completed.

Restoration works to re-profile and block the extensive hagg and gully complexes across the site were carried out by experienced peatland contractors throughout winter 2020-21. It is estimated that over the next 35 years, the restoration of the site will halt the loss of 2,335 tons of carbon emissions equivalent, which roughly equates to the amount of carbon dioxide generated from burning 632* household tanks of oil.

As well as halting the loss of carbon from the site and protecting the significant store of carbon in the peatland, it is anticipated the restoration works will have wide-spread co-benefits as such improved water quality, steadier water flow, increased biodiversity, and improved habitat conditions for freshwater invertebrates and birds. The site sits within the Berwyn and South Clwyd Mountains, which is one of the largest areas of upland heath in Europe and is the most important upland area in Wales for breeding birds, including a wide range of internationally important species.

The project was co-funded funded via public funding from the Welsh Peatlands Sustainable Management Scheme (SMS) project alongside private funding generated from the sale of carbon credits through Forest Carbon – the first peatland project to have benefited from this ‘blended funding’ approach in Wales. The sale of carbon credits was made possible through gaining validation from the Peatland Code, which is a voluntary certification standard for UK peatland projects. By choosing to submit the project through the Peatland Code, the Roberts family have ensured that the methods of restoration and plans for maintenance of the site meet the required standard, and that the calculated carbon savings are accurate. This validation has allowed the Roberts family to sell these carbon savings on the carbon market, generating income for the ongoing maintenance of the site for the next 35 years.

DEYA Brewing, working in conjunction with Forest Carbon, have committed to acquire the 2,335 tCO2e of carbon savings that the project is estimated to deliver over the next 35 years, thus providing funding for the sustainable management of the site and securing the future environmental benefits of a restored peatland.

George Hepburne Scott, Director at Forest Carbon said: “This is the third peatland restoration project in the UK, where Forest Carbon have helped utilise carbon funding alongside public grants to help finance their delivery. We believe there is huge scope to build on these projects and scale up rates of restoration over the coming years by more effectively blending the use of private and public funding”.

Rachel Harvey, Welsh Peatlands Project Manager at Snowdonia National Park Authority said: “This is only the third validated Peatland Code site in Wales, and the first to be co-funded with carbon finance and public funding. Bwlch y Groes is not only an excellent example of how the Peatland Code can facilitate long-term peatland restoration, but it’s also acting as a trailblazer for similar sites owned by single landowners or farming families. We hope the success at Bwlch y Groes will lead to many more of our Welsh peatlands adopting the Peatland Code for long-term restoration and management”.

Sion and Lisa Roberts of Pennant Farm, the landowners said: “We are very pleased to be able to rear livestock for food production alongside enhancing habitats and increasing the carbon store at Bwlch y Groes. The process has been very straightforward from restoration works to selling the carbon credits, and we are looking forward to further potential projects in years to come”.

Theo Freyne, owner of DEYA Brewing, said: “The investment that DEYA Brewing have made into the delivery of the Bwlch y Groes peatland restoration project is part of our wider efforts to mitigate the impacts of our residual emissions whilst we are making every effort to implement internal carbon reduction measures across our brewing operation”. 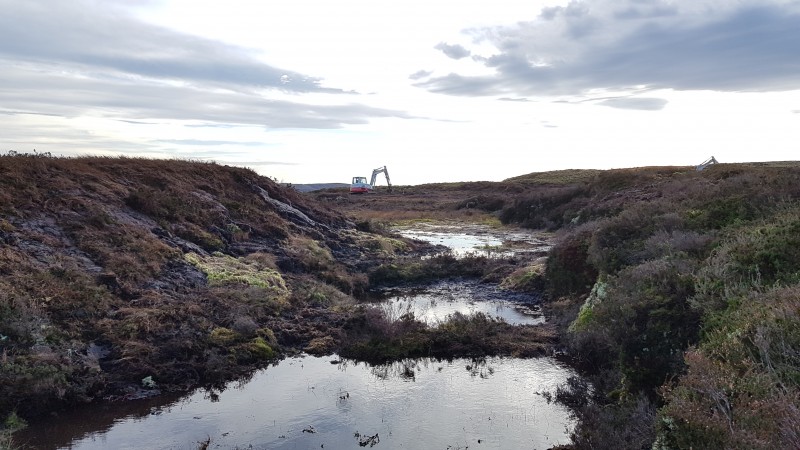 *Calculations based on Defra figures (2007) that 2.96kg of carbon dioxide is generated for every litre of oil burned.